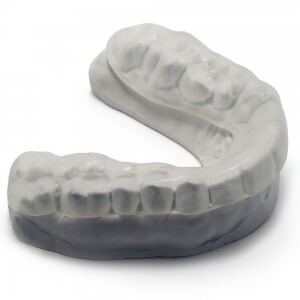 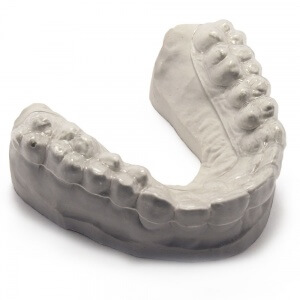 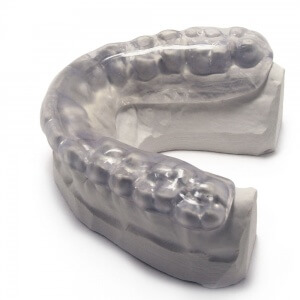 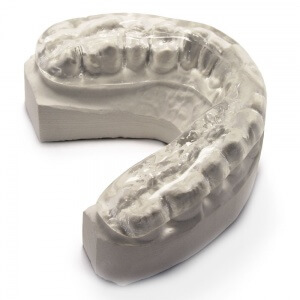 What are Night Guards and Mouth Guards made of? Are they safe materials for us?

BPA, Phthalates, and MMA are some of the range of plastics used in construction of night guards. It has become recognized that most people want to know more about the plastic products they’re using. Plastics can contain harmful chemicals, so knowing what they are is a logical precaution to take before any purchase.

Bisphenol A (BPA) is a standard in many household plastics, i.e., water bottles, canned food, dental sealants, as well as a wide variety of manufactured essentials. Through animal testing BPA has become a concern when used in large quantities, as it is possible to affect regulatory hormone levels and bodily functions, which could lead to serious issues. Behavioural problems, heart issues, cancer, and other critical conditions such as Attention Deficit Hyperactivity Disorder (ADHD) and diabetes can come from an overexposure of BPA.

Those who utilize a mouth guard on a nightly basis for relief from bruxism (grinding or clenching of the teeth) may want to better understand what chemicals they are subjecting themselves to. Guards worn as a preventative step are left in for prolonged periods of time during sleep, increasing the user’s risk of harmful chemicals when present in the material.

Sufferers of bruxism can rest assured as the materials used in production are free of BPA. According to the American Dental Association (ADA), modern dental materials are constructed with other ingredients, focusing to eliminate BPA as a primary element. Only residual amounts of BPA are being ingested, mainly products containing dental composites and dental sealants, as well as in oral cavities, as over time the saliva can breakdown the material of the filling.

There is zero risk of exposure to BPA when ordering online at ProTeethGuard, as all night guards are free of any harmful chemicals during production.

Used in plastics as a chemical to create a more flexible and malleable product, it is of high concern for most if the existence of phthalates are contained within. Often referred to as plasticizers, phthalates are often used as a dissolving agent for various other materials, such as vinyl, detergents, adhesives, oils, plastics in clothing, to personal care products like hairsprays, shampoos, and soaps. Other phthalates are utilized in polyvinyl chloride types of plastics, i.e., plastic wrap on packaging, hoses, inflatable pool toys, tubing, and some children’s toys. Approximately 470 million pounds of phthalates are manufactured every year according to the 2006 EPA (Environmental Protection Agency) statistics, but fortunately many of the products produced with phthalates are able to be substituted for an alternative plastic.

The Center for Disease Control and Prevention (CDC) has noted the health effects from exposure to phthalates is still relatively unknown, but on animals it has affected reproductive abilities at even low exposure. It has been observed that the majority of the adverse effects seen in animals are linked to the age and the time of exposure, as pubescent animals were affected at lower doses, while the adults required more for the same effect. Most human exposure to phthalates are through eating and drinking foods that are in contact with containers produced from this chemical. Infants and children are easily exposed when in contact with toys manufactured with the chemical. Studies have to yet to find a link between exposure time in humans and its health effects. So, though they can be ingested fairly easily as most plastic food product storages contain phthalates, it is important to note that it is quickly converted to metabolites that pass easily during urination, so there are no long term issues from exposure. Even with detectable concentrations of phthalates in urine, there is no correlation of this and health degradation or concerns.

Phthalates exist within many vinyl elements and used in the process of Ethylene Vinyl Acetate (EVA), which has been considered a safe alternative and used in many soft flexible plastic products. Among these plastics are mouth guards to create the softer forms, as well as the inner layer for the hybrid models. The harder acrylic model does contain phthalates as well, as the plasticizer giving the guard a thermoplastic nature requires it as an ingredient, but this type is not actually harmful and not to be mistaken for the other phthalates.

Also known as MMA, Methyl Methacrylate is a chemical often used in nail salons for acrylic nails. MMA has had many complaints, as the chemical has caused serious irritation when come into direct contact with the skin or on the nail bed of the finger. Only at the tail end of 1970 have salons been approved to use MMA as an applicant for the acrylic nails. Aside from the use of MMA in nails, it is commonly used in products such as plexiglass, siding for buildings, signs, fixtures for lighting and bathrooms, as well as medical cement used in bone replacement surgery. Unlike the raw chemical, these instances are with a cured and sealed variety of MMA not subject to direct harmful exposure as with the early nail applications.

According to the Environmental Protection Agency (EPA), MMA is classified as a non-carcinogenic substance for humans, or a Group E chemical. It is a non-carcinogenic chemical—so not cancerous—to any humans under any duration of exposure and has been evaluated through four well-constructed studies of inhalation in animals as safe. These studies demonstrated that MMA had no adverse health effects on the subjects. Though research has shown an exposure to ethyl acrylate/MMA has increased the chances of colon cancer in workers who are in direct contact of the chemical, a reproduction of the results could not be duplicated through similar and recent studies. The relationship between exposure times and the effect could not be demonstrated, thus there is low potential for any negative effects on humans at any level.

Hard teeth guards are made of rigid acrylic, so it is understandable that customers would be concerned about the exposure they may experience with MMA. Ordering online through ProTeethGuard will ensure your safety, as our night guard materials don’t contain any MMA in their construction.